If you are visiting Ajmer for the first time and want to know which are the famous places in Ajmer, then, here, is a list that’ll help you. As one of the best hotels in Ajmer, we cater to a lot of tourists – Indian as well as International and some of the questions we are often asked is, ‘which are the best places to see in Ajmer?’ or ‘which are the popular tourist places in Pushkar?’ Thus, if a trip to Ajmer is on your bucket list, then check out some of these tourist places in Ajmer known for their historical significance and other absolutely delightful & fantastic touristy destinations.

Located in the heart of Rajasthan, Ajmer, founded in the 7th century A.D. by Raja Ajai Pal Chauhan has a very interesting past. It was from Ajmer that the last Hindu ruler of Delhi, Maharaja Prithviraj Chauhan, controlled a major part of northern India. Today, Ajmer is more important as the final resting place of the great Sufi Saint – Khwaja Moinuddin Chishti and is one of the revered places in India for the Muslims. 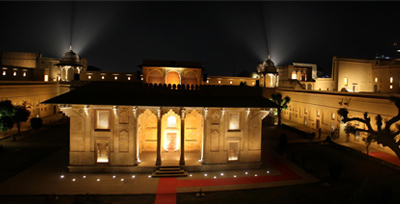 Just as the Muslims revere the Dargah here, the Hindus accord the same sanctity to the holy town of Pushkar. Located just 11 kilometres from Ajmer, the Holy Lake of Pushkar is believed to have been created by Lord Brahma himself. Devout Hindus believe that it is essential to visit Pushkar at least once in their lifetime.

The Chauhans dominated Ajmer for many years and it was only toward the end of 12th century that Maharaja Prithviraj was killed in the battle with Muhammad Ghori. This totally changed the history of the region. The importance of Ajmer diminished with the death of its most valiant ruler and Ajmer passed under the Delhi Sultanate.

From then on, Ajmer saw many upheavals until Emperor Akbar came to the throne in 1556 and gave Ajmer the status of a full-fledged province. He also used Ajmer as a base for his operations in Rajputana. But Ajmer saw some more turbulence when the Mughals, the Marathas and British all tried to interfere in the affairs of this province.

However, from 1818 AD onwards, the British Empire gained full control here and it remained so until India’s independence. The British left behind a legacy that still lives on in the fine education institutions, the colonial bungalows, the clubs and the old railway quarters. 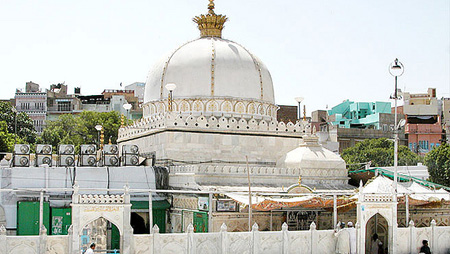 Today, Ajmer is more important as the final resting place of the great Sufi Saint –Khwaja Moinuddin Chishti. Muslims from all over the world revere the Dargah Sharif, where the saint lies buried. This has been so for centuries now. Even the Mughal Emperor Akbar walked to the Dargah all the way from Agra.

Every year lakhs of Muslim devotees gather here to pay homage to the Garib Nawaz – ‘the Protector of the Poor.’ The best time to visit Ajmer Sharif Dargah is during the annual ‘URS’ festival (the death anniversary of the Sufi saint). During this time, you’d see an altogether different side of this sleepy little town, where on normal days, very little activity seems to be going on, but during the festival, it suddenly booms into a bustling, lively place.

While the dargah is one of the major Ajmer attractions, don’t miss seeing the beautiful Adhai Din Ka Jhonpra with its ornate calligraphic inscriptions. The other places of interest in Ajmer are the Taragarh Fort and the Ana Sagar Lake with its  marble pavilions.

According to “Prithviraj Vijaya,” Arnoraja or Raja Anaji (1130-1150 A.D.) the grandfather of Maharaja Prithviraj Chauhan, had built the picturesque lake of Ana Sagar at Ajmer in order to purify the land which was alleged to have been despoiled by the spilling of the Mussalman blood in a battle fought at this place.

As a man-made lake, this is the most scenic and relaxing tourist place in Ajmer. This lake offers you activity like boating. Also, right next to the lake is the beautiful and well-manicured ‘Daulat Bagh’ garden which was commissioned by the Mughal Emperor Jahangir.

When it comes to Ajmer places to visit, this is another destination that tops the list. No pilgrimage is considered complete without a dip in the holy Pushkar Lake. Pushkar has as many as 400 temples and 52 ghats and the only temple in the country that is dedicated to ‘Lord Brahma’ is found here.

Pushkar Lake is surrounded by hills on three sides and the desert on the other side. There is one belief that Kalidasa, the Indian counterpart of Shakespeare, had this place as his locale for his Sanskrit drama, Shakuntalam. According to a legend, the lake was formed when Lord Brahma wanted to perform a Yagna here. This is the reason a temple dedicated to him can be seen here. 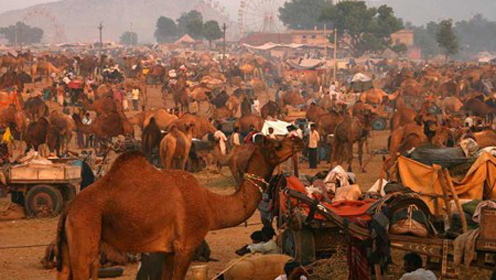 While Pushkar is a haven for the religiously inclined, it is also the venue of one of the country’s most colourful cattle fairs – the Pushkar Camel Fair. This annual fair is an unforgettable event when the entire little town is taken over by lakhs of animals and visitors. This is certainly the best time to visit Pushkar. Just relax and let yourself go, you’ll be carried away by the heady exuberance that is so much a part of this mela. 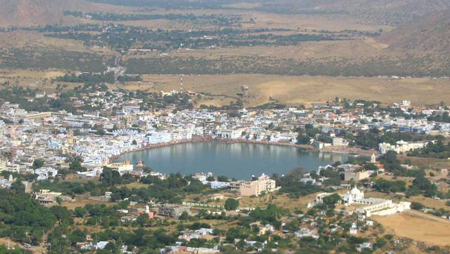 Pushkar Fair is one of the best-known fairs in India. The pilgrims take a holy dip in the Pushkar Lake. The fair falls in Kartik Poornima in October – November. Horses, camels, cows etc are traded at this cattle fair. There are also races and other events. A large number of markets come up selling various items as is usual with all fairs and festivals.

So, ride camels, shop at the colourful market, watch the sunset over the sand dunes. You can even try donning the local outfits – gorgeous odhnis (scarves) and turbans. Do what you will, the Pushkar Camel Fair is a once-in-a-lifetime experience that you will want to repeat.

Other Pushkar Sightseeing Places include;

Other Tourist Places Near Ajmer Rajasthan

So this is the complete list of places to visit in Ajmer and Pushkar. If you want to visit Ajmer and are looking for luxury accommodation then check out the wide variety of accommodations we offer and book now. For more details or any query, you can also contact us and we’d be happy to help you out!

Whether you're visiting Ajmer with your family or travelling for business or travelling alone just to visit the famous Ajmer dargah, your search for the perfect hotel in Ajmer ends right here. Since 1992, The Ambassador Hotel in Ajmer offers visitors - domestic and international alike - the best-in-class accommodation and excellent facilities that deliver value for money. Located centrally in the heart of the Ajmer city, here, you’ll experience a warm welcome, personal service and great hospitality.

As one of the best hotels in Ajmer near the dargah, The Ambassador Hotel is a popular hotel and conference centre. Alongside contemporary and spacious accommodations, they also offer many in-house facilities that ensure your family, business or leisure stay is special and memorable.

Talking about the accommodation, you have the option of choosing from the Maharaja Suite, Prince Suite, Super Deluxe, Deluxe and Standard rooms. You can go here to check the prices . The amenities included in each room are king/queen size bed, mini-fridge, LCD TV with cable, tea/coffee maker, free WiFi and laundry services. All rooms are air-conditioned, have an en-suite bathroom and complimentary toiletries are provided for. We believe in complete integrity and offer high-quality service without any compromise. Our rooms rate are all-inclusive, with no hidden charges.

Being a famous hotel near Ajmer dargah, we also have an in-house rooftop restaurant called Ambrosia. Here, you can partake traditional and neo-Indian cuisine while you gaze at the spectacular mountain ranges nearby. Just like the wide variety of accommodation options, here, too, you have the choice of seating arrangement that ranges from Arabic style cabanas to contemporary air-conditioned dining room.

For hotel booking in Ajmer , The Ambassador is undoubtedly an excellent choice. Likewise, If you are searching for Ajmer hotels for a conference or to host a wedding/event, then The Ambassador Hotel is again a great choice that you won’t regret. They have a large conference/banquet hall that can accommodate a group of 150 people, making it an ideal option for small weddings and seminars/conferences.

Handled by a team of professionals, The Ambassador Hotel in Ajmer, Rajasthan offers you the best rates for accommodation. You can also be assured of top-notch services and experiencing luxury at its best. Thus, if you are looking for a hotel near Ajmer Sharif dargah, then this luxury hotel in Ajmer is a perfect match.

Contact us if you have a query and we’ll be happy to be of assistance!